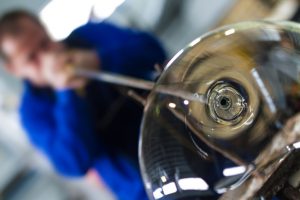 Artist Dan Dailey has been working with glass for more than 40 years. He emerged out of the original Studio Glass Movement, first spearheaded by ceramics professor Harvey Littleton and chemist and engineer Dominick Labino at the Toledo Museum of Art in 1962. The experimental character of blown glass art quickly gained momentum and shape with the attention of artists such as Ann Wolff in the later 1960s.

Dailey, however, has a style all his own. As a creator of both functional glass art and glass sculptures, he draws inspiration from familiar images and human personalities to make colorful and often humorous two-dimensional plate sculptures, chandeliers, lamps, and figures.

Dan Dailey’s early aspirations to become a cartoonist were soon overshadowed by his love of glass art while earning his B.F.A from Philadelphia College of Art in 1969. He went on to an M.F.A. at the Rhode Island School of Design, where he worked as a graduate assistant for Dale Chihuly.

Dailey went on to teach at the Massachusetts College of Art, where he founded the school’s glass department, as well as the Massachusetts Institute of Technology, the Rhode Island School of Design, the Pilchuck Glass School, and the Haystack Mountain School of Crafts.

His work has been featured in over 90 solo exhibitions and over 250 juried and invitational group shows, including a major retrospective at the Renwick Gallery of the Smithsonian Institution. His work can currently be found in more than 45 museum collections around the world.

“No other material comes to life with light like glass,” he says. “Color, transparency, translucency, are all accommodated through that one medium.”

His most recent installation is entitled “Voyage,” an illuminated sculpture and working clock that can be found at the ATCO Properties and Management building at 555 Fifth Avenue in Manhattan. The sculpture is nine feet tall with 38 glass parts, each transformed from raw materials at temperatures of 2,400 degrees Fahrenheit. The sculpture took more than two years to construct.

“It is an ethereal concept, yet it is a functional work,” Dan Dailey said of “Voyage”. “The technical look and the complexity of the piece represent a new way of realizing an idea based on techniques and design concepts that have driven my art for many years… It just took the right client to trust me to follow this particular path of thought.”