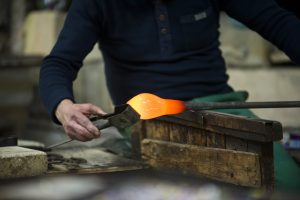 The molding and shaping of glass as an artistic, expressive medium is a tradition that can be traced back to ancient times, but it’s only relatively recently that “studio glass” truly became a celebrated fixture of modern art.

What separates studio glass art from other forms of functional glass art is its focus on the artist as the sole designer of a piece and the creation of one-of-a-kind works through the use of small furnaces. In this sense, contemporary glass art is truly Modern Art in the philosophical meaning of the word: focused inward while projecting a social awareness of a rapidly developing society.

The origins of the studio glass movement can be pinpointed quite precisely; it was born out of two workshops held at the Toledo Museum of Art in 1962. Harvey Littleton, a ceramics instructor at the University of Wisconsin at Madison, became interested in glass as a medium that artists could use on an individual, small scale.

Up until that point, most glass artwork — such as that of Louis Comfort Tiffany — was created by a designer but executed in industrial manufacturing settings. Littleton envisioned a studio space where artists could both design, create, and execute their own pieces from start to finish.

At Toledo, Littleton teamed up with Dominick Labino, a chemist and engineer who then worked for the Johns-Manville Fiberglass Corporation. Labino assisted in designing a small furnace used to melt, fuse, and design glass using affordable elements and materials that could be utilized within a (somewhat) traditional studio space.

Littleton returned to the University of Wisconsin after the workshops and implemented a glass program within the school’s ceramics department. Some of his earliest students became the game-changing pioneers of modern art in glass, including Dale Chihuly, Marvin Lipofsky, and Fritz Dreisbach.

Today, studio glass pieces range from small ornaments to larger-than-life installments, and glass is one of the premier mediums for new and emerging artists to explore. Despite its humble origins in the garage of a museum, the studio glass movement is arguably one of the most important recent advancements in the world of contemporary art as we know it.