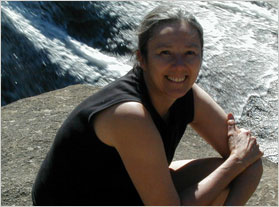 Kathleen Mulcahy is an award-winning glass artist who lives and works in Pittsburgh, Pennsylvania. “Glass, “she says, “is the verb of my work revealed through the primal form of a drop”

Her glass drop installations incorporate bent and etched plate glass on patinaed or textured steel.  As an avid kayaker, she experienced a moment that changed the direction of her art. A storm came upon the river suddenly. In its wake it left her with a moment of pure joy, of wonder, that she works to recreate in her drop installations.  Her inspiration, drawn from the natural world – water and rivers, often titled after excerpts from poems exploring the boundaries and freedoms that affect relationships; people to people and people to nature. Nature is the reflection point of her work. Kathleen pushes the limits of the medium, merging sculpture with craft to create masterful works in glass and metal.

Mulcahy received a Masters of Fine Arts in glass sculpture and three-dimensional design from Alfred University. Afterwards, she directed glass studio programs at Bowling Green State University in Ohio and Carnegie Mellon University in Pittsburgh then went on to develop the Pittsburgh Glass Center, one of the premier public access glass studios in the nation. During this time, her own work — installation pieces, cast glass, and blown glass objects — evolved into unique and poignant statements. Kathleen received Fellowship Awards from the Pittsburgh Cultural Trust, the National Endowment for the Arts. the Pennsylvania Council on the Arts, The Creative Glass Center of America.  She received The Lusk Memorial Award through the Fulbright Foundation, The Mid Atlantic Arts Foundation.  In 1992, she was named Artist of the Year by the Pittsburgh Center for the Arts and Pennsylvania Artist of the Year by Governor Corbett in 2013. Her works are in many public and private collections including the American Craft Museum, The Corning Museum of Glass, The Carnegie Museum of Art, The Renwick Galleries of the Smithsonian Institution and The Westmoreland Museum of Art. In 1997, she was selected as Fellow of and Artist in Residence at the Cité Internationale des Arts in Paris.

Mulcahy positions herself as an internationalist – a word she coined to describe someone who uses art and the making of art to transform communities.  Drawing on individuals of different backgrounds and ethnicities, the community comes together to make and appreciate expression and skill in a unique and challenging material.

Though independent in their personal art practices, Mulcahy and her husband, Ron Desmett, were partners in creating commissioned work that showed the breadth of their talents together.  They created, for example, 100-foot steel I-Beam trees for the corporate headquarters of American Eagle Outfitters in Pittsburgh.  They also worked on suspended steel and glass sculptures for Harrisburg Corporate office of the Pennsylvania Department of Transportation, a glass block and painted wall for the Light Rail Transit in Pittsburgh and other public and private commissions.

Ron was also a partner in their shared community activism.  They created a public works project for the town of Carnegie that was recognized as one of the 100 small art towns in the country. They were sought after to create the public glass arts center that was a life’s work.  In 2016 Desmett passed away after a long battle with cancer.  Mulcahy continues their shared artistic endeavors.

Mulcahy credits Alfred University for giving her a life-long mantra.  Years ago, she walked by a marquee that described the school’s mission statement:  A liberal arts college, majoring in the human experience.

Her art touches lives – it speaks to the depth of humanity.

1992  Artist of the Year, Pittsburgh Center for the Arts, Pittsburgh, Pennsylvaniaard1978Invited Participant to the World Crafts Council, Kyoto Japan