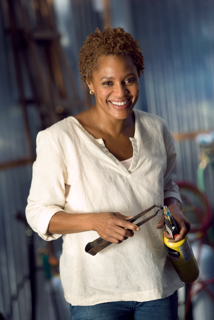 Debora Moore has been an instructor at Pilchuck, Pratt, and the Hilltop Artist-in-Residence Program in Tacoma, WA. In 1998, she was accepted as a member in the African American Design Archive at the Cooper Hewitt National Design Museum. Her work was included in the Artistry of Orchids exhibition at the Smithsonian Institution in Washington, DC in 2000. Her solo exhibition, Nautral Reflections, opened in 2005 at the Museum of Glass in Tacoma, Washington, followed by a residency at the Museum. In 2005, she was also awarded artist-in-residence at the Abate Zanetti School in Murano, Italy.

Debora was awarded the Rakow Commission in 2007, with inclusion in the permanent collection at the Corning Museum of Glass, and participated in Corning’s Meet the Artist podcast series. Since 2009 she has exhibited at the Tacoma Art Museum, Glasmuseet Ebeltoft in Denmark, Bellevue Art Museum, the Chrysler Museum of Art in Norfolk, Virginia as well as the Baker Museum in Naples, Florida. In 2015, in addition to a residency in Niijima, Japan, Debora had a major solo exhibition at the Northwest African American Museum in Seattle, WA. Looking forward to 2017, Debora will have a large scale installation at the W.W. Seymour Botanical Conservatory and solo exhibition at the Museum of Northwest Art.