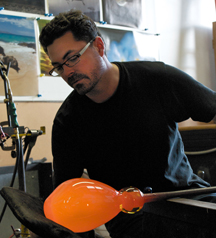 A native of Seattle, WA, John Kiley began his professional career at the age of 19 at The Glass Eye Studio. Promoted to Gaffer on Dale Chihuly’s chandelier team at the age of 21, he traveled to Finland, Ireland, Mexico and Italy as part of the Chihuly Over Venice Team. He was a principal member of Lino Taglipietra’s team until 2011 when he became the Glass Director at the Schack Art Center in Everett, WA. In addition to his work with Chihuly and Tagliapietra, John has worked with Dante Marioni and Benjamin Moore and has been a teaching assistant to Lino Tagliapietra, Dante Marioni, Benjamin Moore, Richard Marquis, Josiah Mcelhenny,Checco Ongaro and Ben Edols.

He has been a visiting instructor at the National College of Art and Design in Dublin, Ireland, The BezalelAcademy of Art And Design in Jerusalem, Israel, The Pittsburgh Glass Center and Pratt Fine Arts Center in Seattle, WA. He has worked and demonstrated in Finland, Ireland, Mexico, Italy, Japan, Bulgaria, China, Australia, Brazil and Turkey. John exhibits his work in galleries around the world.

The Museum Of Glass, Tacoma, WA