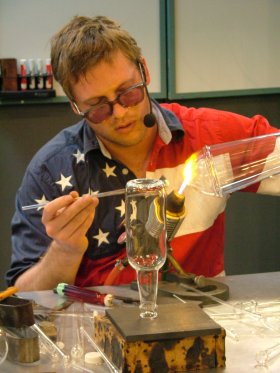 Matt Eskuche began working with flameworking in 1998 and has studied with many talented contemporary makers including Emilio Santini and Cesare Toffolo.

He teaches classes at many national and international schools and studios including Corning, Penland, and Pilchuck and exhibits his work with galleries and museums throughout the country.

His work can be found in many publications and in the collections of the Philadelphia Museum of Art, the Racine Art Museum, the Museum of Arts and Design in New York. the Lamwork Museum in Kobe Japan, the National Gallery for Foreign Art in Sofia Bulgaria, and in the Eskisiher Contemporary Glass Arts Museum in Turkyie.