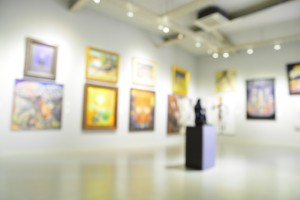 There’s more to modern art than auction houses and museum events! Here are some of the cool things you might not have known.

There was a sculpture so small, its artist accidentally inhaled it -Willard Wigan creates works of art that are so tiny that he once inhaled one by accident, which is a shame for him, because just one of his works will sell for about $40,000. There is even one that can fit on the eye of a needle.

Art heists still happen– Buying art is super easy now, thanks to the Internet. In fact, 71% of art collectors now purchase art online. However, there are some pieces you simply can’t purchase, online or offline, that people just “have” to have. In 2008, four paintings worth $162.5 million were stolen from the Foundation E.G. Buhrle Collection: a Cézanne, a Degas, a Monet, and a van Gogh.

Picasso was once suspected of stealing the Mona Lisa – Speaking of art heists, the most expensive art heist happened in 1911, when someone stole the Mona Lisa. It turned up in Italy in 1913, but until then, investigators suspected Pablo Picasso had done it. He was cleared and released after being arrested and questioned, though.

There’s a lifelike glass sculpture of a dress – Karent LaMonte is an American artist known for her life-size sculptures in cermain, bronze, and cast glass, as well as her large scale monotype prints. During her Fulbright year, she created a glass sculpture of a lifelike dress she called Vestige. What’s also interesting is that the art of glassblowing is centuries old. In fact, it became popular because its invention coincided with the establishment of the Roman Empire. Now, it’s been perfected to such a degree that it can create lifelike objects.

These are just some of the weird modern art facts out there. If you know of any others, feel free to share in the comments.