Dominic Wilcox Takes a Bold Risk in His Latest Installation 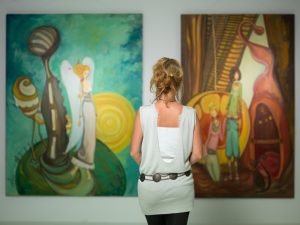 Contemporary art comes in many forms and mediums. American artist Karen LaMonte is well-known for her life-sized bronze and ceramic sculptures. Ann Wolff, a German artist, found herself immersed in glass artwork, as a founding member of the Studio Glass Movement. While glassblowing began in the first century B.C. during the establishment of the Roman Empire, modern studio glassblowing began in the 1960s, with the work of artists like Wolff.

Contemporary art is, by definition, art produced in the present time. While LaMonte and Wolff have created striking sculptures during the modern age, one British designer has created contemporary work, quite literally, for the dogs.

Dominic Wilcox is known for his whimsical style and cross-use of art and technology. His body of work is perfectly suited for the social media age.

He has created striking, innovative designs like a stained glass driverless car and invented contraptions like a cereal bowl that amplifies the crackling sounds your breakfast makes when the milk has been poured over. His award-winning blog, Variations on Normal, showcases his sketches of the designs, inventions, and inspirations of his installations.

His latest endeavor has taken whimsy to a new level, as he’s created a contemporary art exhibition exclusively made for dogs. If it’s nothing more than a publicity stunt, it’s working.

Located at the Tate Modern in London, pieces such as a 10-foot dog bowl filled with balls and a multimedia installation of a frisbee bouncing around a screen provide the dogs with the same immersive, inspiring experiences that we humans have when seeing artworks like those of LaMonte and Wolff.

This interesting choice of exhibition was inspired by a campaign by British Insurance Company, More Than, which provides a variety of services, including pet insurance. The company encourages pet owners to improve their animal companions’ mental and physical health by playing with them more often. Wilcox’s pop-up exhibit is meant to do just that, giving dogs an opportunity to explore and play.

Each piece is a representation of things that dogs like to do. Cruising Canines utilizes all the dog’s senses, by simulating a car ride. The open window cut-out is placed next to a fan that wafts a dog-safe perfume that smells of old shoes and raw meat.

This sort of innovation embodies all that has come from the contemporary art movement, where nothing appears to be too audacious or off-limits.