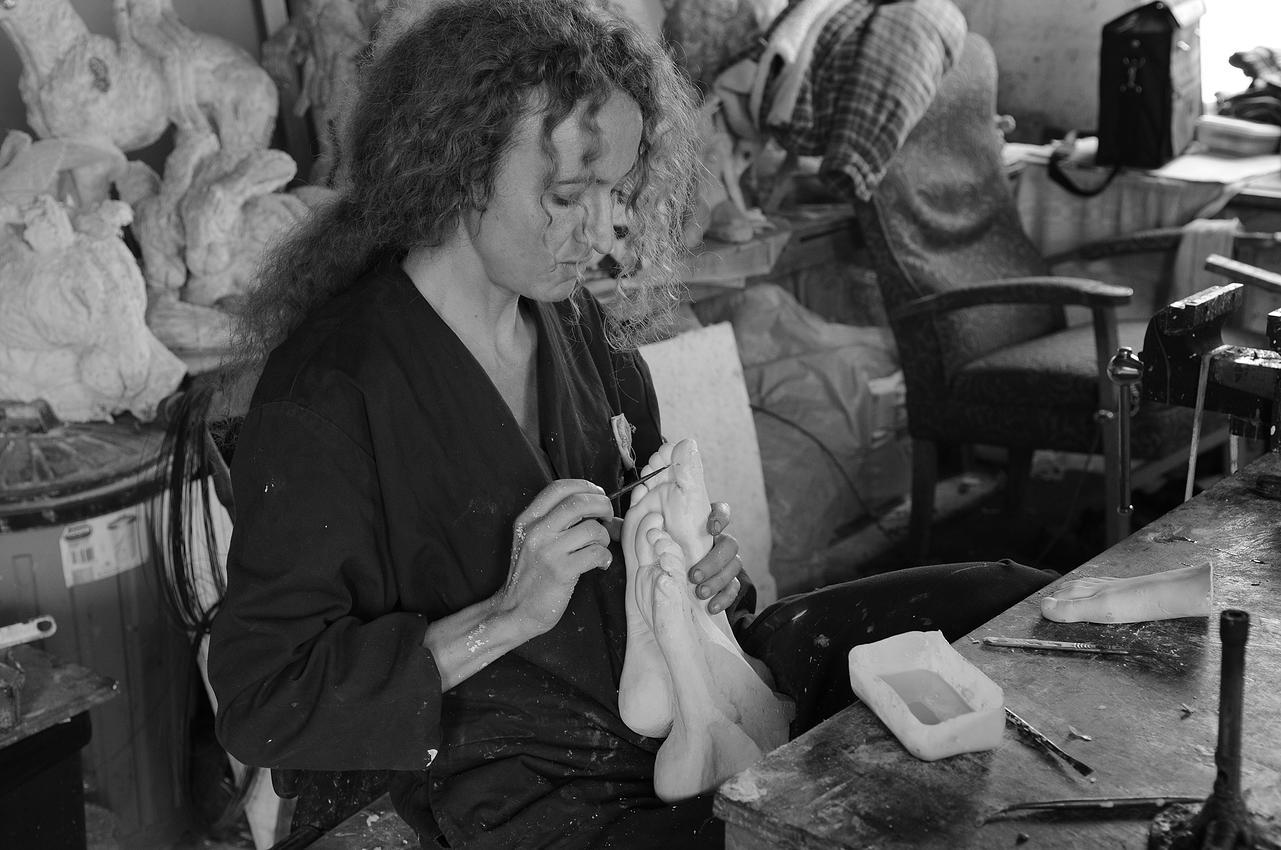 These art objects are direct products of her working methods, and as such they have an inherent fascination – people are naturally intrigued by unusual processes. It is still necessary, however, to see beyond them and recognise that the materials are a means to an end: the communication of ideas. They lie at the centre of all the artist’s creations, and they are fed by a spring that never runs dry. Indeed, the ideas emerge so quickly that she never has enough time to implement all of them. The ability to retrieve and develop an idea will depend not only on how other projects are progressing, but also on the resolution of any technical hurdles she may have set herself, especially in relation to her larger sculptures.

Working ‘big’ is a very significant feature of her work, and she enjoys rising to the constructional and creative challenges which flow from this aspiration.
Many of the people who meet the artist, whether in her studio, at an exhibition opening or an art fair, have already formed a mental picture of a six-foot Amazon with enormous biceps. How else, they think, could such larger than life creatures be brought into the world by a woman sculptor?
They have to struggle to hide their astonishment when they confront reality: Sophie is five foot five, slender, softly spoken, slightly dreamy (mostly she is thinking about work in progress) and wears her hair in long tresses. She is altogether more reminiscent of a Pre-Raphaelite muse than a prolific builder of potent images. Looks do deceive, of course, and in her case the evidence of her hard profession is born on the tips of her fingers. These have become so abraded by the materials she uses that she has virtually lost the capacity to make fingerprints. Commitment is all, and one sees the same quality applied to everything else that matters to her – family, daughters, friends, dogs, cooking and eating organic products, keeping fit with daily runs, playing classical guitar and watching no television. The only way she can maintain a healthy balance is to have a very disciplined approach to her work, and to pull in helpers on the strict understanding that they will deliver an equivalent level of commitment. She is not a prima donna, however, as anyone hearing her infectious laughter is bound to appreciate. She has an ability to see the funny side of things without ‘making’ fun, and much of her work expresses her desire to preserve her own ‘joie de vivre’ at all costs, reawakening ours in the process.

Sophie Ryder was born in London, England, in 1963. During her childhood, her French mother travelled to Provence in the south of France where the family spent the entire summer. She studied Combined Arts at the Royal Academy of Arts where, while obtaining her diploma in painting, she was encouraged by fellow artist to develop her sculpture. Inspired by Picasso, Goya and Henry Moore, she famously developed the Lady Hare as a counterpart to Ancient Greek mythology’s Minotaur.