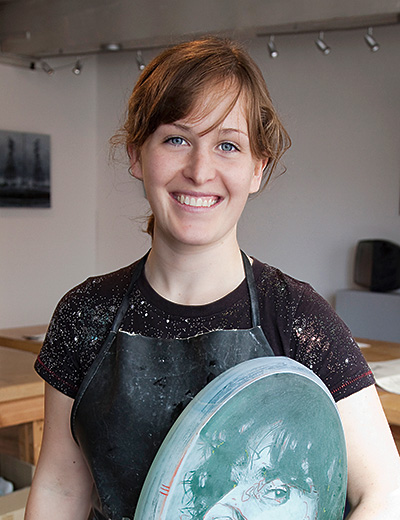 April Surgent started working with glass in 1997, in Seattle, WA. She studied at the Australian National University, Canberra, Australia, earning her B.F.A. with honors, in 2004. She moved back to Seattle in 2005 and set up a cold-working glass studio with artist, Ethan Stern. Since 2003, Surgent has taught, lectured, and exhibited her works internationally. In 2009, she was awarded one of the two prestigious Neddy Fellowships, through the generosity of the Behnke foundation, along with the UrbanGlass, New Talent award. In 2010, she had her first solo museum show, at the Bellevue Arts Museum, WA. She was recognized by her peers at the Tacoma Museum of Glass auction, receiving the ‘Artist’s Choice’ award, in 2011.

On her journey with glass Surgent had the opportunity to study with Czech master engraver Jiri Harcuba at Pilchuck glass school, in 2003. Harcuba introduced her to the technique of engraving, which has become the predominant method she uses to make her work. Harcuba became Surgent‘s mentor and in 2008, they started instructing a series of short courses together. Their classes have centered on the idea that glass engraving can be contemporary art. Interested in the juxtaposition of using an “endangered” traditional craft to make contemporary art, she focuses on making permanent, archival records of contemporary life.